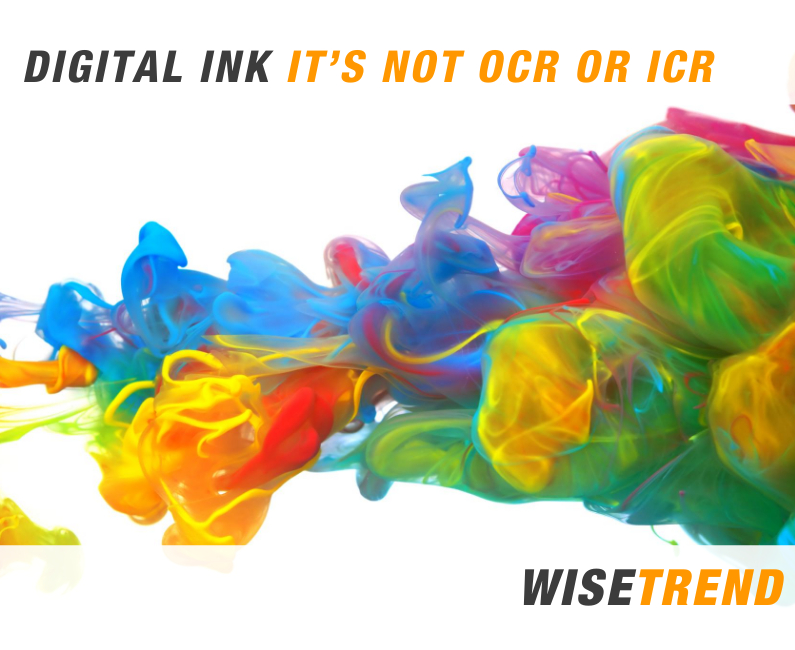 Digital ink is the approach of having a touch screen device that monitors a users movements with a stylus on the screen to determine character was written. This is not OCR or more specifically ICR. Very often companies have asked for OCR technology when they meant digital ink and vice versa. OCR and digital ink overlap but not always. There are cases where you simply cannot do away with paper, and not to mention digital ink does not process typed text.

The first time the technology was seen was back when Apple released the Newton. The newton was the first PDA that had a touchscreen and stylus. Later Apple sold Newton to become Palm Computer. At that time you had to re-learn how to write characters according to a guide. The characters were specifically structure to provide the best recognition and then had to be completed in a single hand-stroke. When mastered, the recognition was very good. Now any tablet PC has a basic version of digital ink software. Digital ink competes with ICR intelligent character recognition or hand-print. Whereas ICR technology is looking at an image of characters written, digital ink is monitoring hand strokes as the character is being written.

The accuracy difference between the two is an argument that can very easily be lost for both sides. There are times when digital ink is way more accurate and times when ICR of paper forms is more accurate. The key really is the business process that the technology is fitting into. Both have their place. Digital ink is usually combined with an elaborate data entry and content management process. Most often digital ink is not about getting a substantial amount of text from the operator but more about the operator answering quick, simple questions usually requiring no writing at all. The amount of characters entered in a digital ink scenario vs. a ICR of a form scenario is many times less. You will not see tablet PCs sent out in the mail to survey a customer base.

The biggest place digital ink is used today is in health-care where the drive is to increase it’s adoption even more. The purpose of the technology in this space is to rapidly populate medical records at the point of examination. However health-care still remains to be one of the top paper generating industries requiring OCR and ICR. This shows that the technologies both satisfy very different needs and should not be confused with each other.